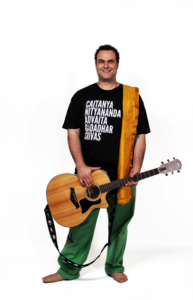 The founder and chief organizer of Chant4Change is world musician Gaura Vani. Growing up in ashrams across the globe, he absorbed the music of Hindu temples as a child, joyfully singing kirtan praise music in many languages. Throughout his travels, he has studied both modern and traditional instruments, including the guitar, organ, harmonium, bamboo flute, and many types of percussion instruments.

Gaura Vani’s performances always involve the audience and invite them to join in the singing and chanting of mantras as a way to experience connection to each other and to the Divine. He has performed with many groups over the years, including As Kindred Spirits and Hanumen. At Chant4Change, Gaura Vani performs with mantra music collective The Juggernauts.

Q: How did Chant4Change come to be?

A: “The first Chant4Change was held during the 1st Obama inauguration, at a church down the street from the White House. We pulled it together in just three months! It was focused on the chant, the mantra. It was more of a celebration. Eight years later, we feel the narrative needs to be more about the unity that is possible in diversity. We were wanting to do something more positive in the middle of what is otherwise a very negative election season.
To sing together, we have to listen to each other. That is why we are doing this event as multi-denominational. Atheists, agnostics, Christians, Jews, Muslims, Buddhists — everyone is welcome. We were created to do the best for each other and the world, in service. This is one way we can serve.”

Q: You said the event is to be multi-denominational. Describe your own religious tradition, and kirtan music.

A: “I come from a monotheistic tradition of Hinduism. The emphasis is on the eternality of consciousness. God is worshiped as a divine couple, as a mother and a father, the source of all creation, the feminine and masculine, the lover and the beloved. The love of Radha and Krishna is the source of life, the source of beauty. Kirtan is naming the Divine. Like David in the Christian Bible said, “Make a joyful noise unto the Lord.” By naming God we are making contact with the Divine. Many religious traditions do this.
There is beautiful poetry about that in Islam, Buddhists call out the name of the Divine, and in the tradition I was raised in, we say God has unlimited names because God has unlimited qualities. Kirtan means praise music, it’s to glorify the Lord.
My Kirtan is sung in Sanskrit; in Pali, the language of Buddhism; in Hebrew, and in English. I grew up in a strict traditional Hindu sect. Christian gospel music sounds to me like kirtan.
Music for me is a gateway to another vision of reality, directly connected to spirit. When I write a song, I feel like it’s coming from another place, like I am channeling it. The purpose of life is to love and to serve all of God’s creatures. I am eager to share that world with my audience, and I am eager to build a community of unity and diversity.”

Q: Why do you think music can affect the national political discussion?

A: “Chant music can be a powerful force for change. To sing together, we have to listen to each other. You cannot take Black Lives Matters by itself, to its logical conclusion. You cannot take the position of the Fraternal Order of Police by itself, to its logical conclusion. We have to listen to each other. Music offers a way to come together and to listen. Through the process of preparing for Chant4Change I’ve learned some amazing things. In Estonia, they called it “the Singing Revolution.” With the fall of communism around 1990, Estonians had no army and they were worried they would be subsumed in war. So the people went into the street and engaged in song, in singing forbidden songs, and it seemed to keep war away. Another thing I’ve learned: Martin Luther King, Jr. was not planning to give the “I Have a Dream” speech that day 53 years ago. He had a canned speech written by his team. Mahalia Jackson, she is a chanter, a great gospel singer, she told him to go off-script and tell the people about his dream. Sacred song is such a central part of people’s struggle. The situation we are facing as a globe cannot be solved alone. We have to listen to one another.”

Pledge to join us for this free event!